Michael Cohen’s testimony at the hearing conducted by the House Committee on Oversight and Reforms last February 27, 2019, opened a can of worms so to speak. Albeit being discredited for his own conviction mainly as a tax cheat, a perjurer, and a falsifier of documents, Michael Cohen produced documents that serve as starting points from which other related documents will be scrutinized.

As a result, Democrats serving as committee members of the House Judiciary Committee, have sent out 81 requests for documents to different Trump Administration members, as well as to family and associates linked to the Trump Organization and electoral campaign. Through the requested documents, the investigating panel aims to establish whether or not, Michael Cohen’s latest testimony is credible, or just another thread of lies to bring down Donald Trump.

According to House Representative Ted Lieu (D-CA), the results of their investigation will either absolve or implicate Trump and members of his family, staff, advisers, campaign supporters and all others linked to Cohen’s testimony of Trump’s wrongdoings.

When asked last Monday if he and every recipient of the document request, intends to cooperate, President Trump signified that he will, as he does all the time and with everybody. However, Trump could not resist adding that the House Judiciary Committee investigation, is a “political hoax.” Furthermore, he suggested that the absence of collusion will render the outcome of the investigation as mertiless. 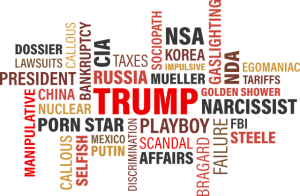 That is Trump’s view; but not for NY Democrat and Chairman of the House Judiciary Committee, Jerrold Nadler. The latter believes that if there is anything that Trump is guilty of, it is that of obstructing justice. Rep. Nadler cited Trump’s public attacks and criticisms on investigators probing his associates and business transactions, as a form of intimidation intended to obstruct justice.

Over the last several years, President Trump has evaded accountability for his near-daily attacks on our basic legal, ethical, and constitutional rules and norms,”…Investigating these threats to the rule of law is an obligation.

Lawsuits a Norm for Trump

In June 2016, USA Today published a list of legal cases filed in US Federal Courts and in common law courts, totalling about 3500. Trump and his businesses were named either as plaintiffs, defendants or as third party to bankruptcy proceedings. In those cases, 500 claims against Trump were dismissed, while of those with clear resolution, 451 were ruled in Trump’s favor, with only 38 cases ruled otherwise.

At least 100 cases reached extrajudicial settlements that paid out hundreds of thousands; the highest known settlement was in the range of tens of millions.

Lawsuits continued to pour in, even during Trump’s presidency, including one involving a mauling incident ordered by Trump against protesters in Louisville, Kentucky. The numbers continue to rise, with the most recent being the lawsuits filed by political watchdogs, and 16 U.S.states against Trump’s national emergency declaration.

In this aspect, Donald Trump surpasses the record of even the most challenged individual to ever assume office as president of the United States, for having faced and about to face an unprecedented number of lawsuits.